Need: In 2015 California Assembly Bill 1461 was passed to make registering to vote “more convenient” for DMV customers engaged in a driver license or ID card task, with an effective date of April 2018. DMV’s IT and policy teams had already been working for 3 years to do their best, time was of the essence and morale was low.

Response: The design and implementation of a new driver license and ID card process that would meet and exceed the needs of AB1461 by also going paperless, was assigned by Governor Jerry Brown to a new innovation team within California’s Department of Technology (CDT) in early 2017. I joined the team as a consultant for the project, in June. 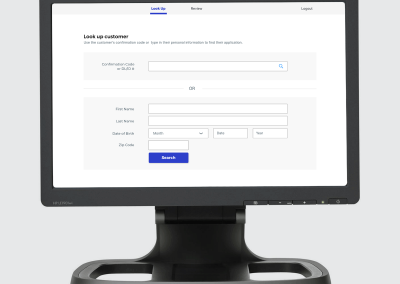 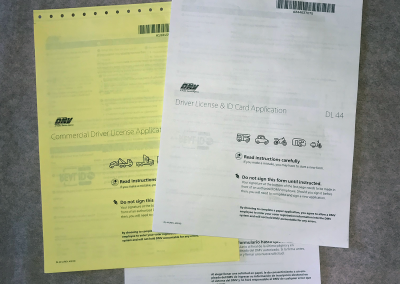 Paper too, just in case

Our stakeholders were unusually resistant to change yet entirely open to research data. Following client kickoff workshops and early CDT team ideation sessions, getting something in front of users asap to start gathering insights was essential. We created two digital prototypes to test against each other. From that first round of testing and interviews we synthesized a wealth of data that set us on the right course to best serve the end users, while keeping good with our resistant stakeholders. 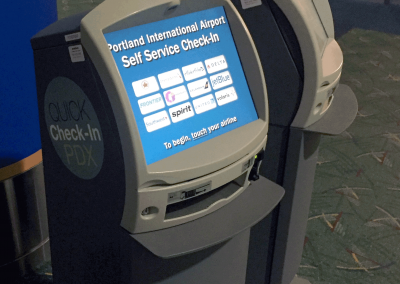 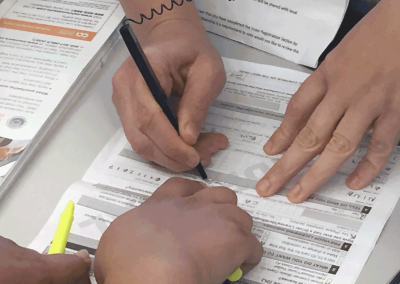 Unlike private industry products and more specialized gov services, our team actually was designing for everyone. Civic personas were how to distill 36 million constituents into prioritized groups of users with clear needs and goals specific to this service.

Framing the service experience
One participant notably kicked-off their participation in the project by declaring “It’s just a f*ing form.” While the core deliverable expected of our team was, yes, simply a form; different customer needs, use contexts, and how DMV agents interacted with customers and their information to complete each application process, comprised a broader service experience that needed to be designed for the one form to seamlessly exist as such. Once the team shifted into delivery mode, a service blueprint facilitated by design and collaboratively built by stakeholders and the full project team was paramount in bringing all players in the CDT, DMV and Secretary of State (SoS) teams into alignment with understanding the breadth and impact of what we were doing. Things also change—constantly—and when they did, so would the living artifact we called our blueprint. DMV and SoS planning efforts around training, rollout, and other processes business rarely think to engage design staff to support, also came to depend heavily on the blueprint. 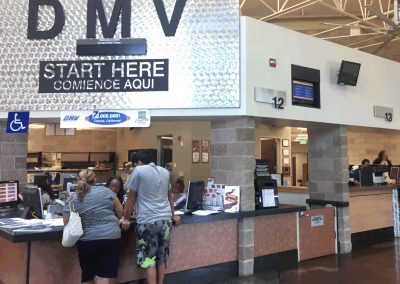 All 172 offices have different layouts and points of customer/agent interaction—so our new ecosystem needed to remain flexible. 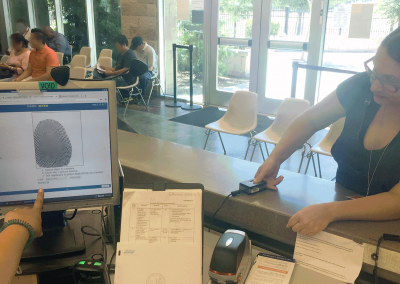 Multi-device line of customer/agent interaction (…and yes, that’s me—perfect timing with needing to renew my license!) 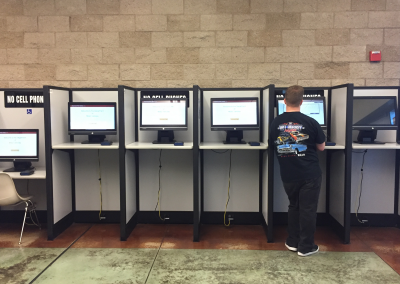 All field offices have an exam area set aside for customers to take Knowledge Exams. These were also used to offer customers privacy with Voter Registration. Having a tablet device at the counter for customer/agent interaction was explored, and will be implemented at a later date—but in and of itself, is a major hardware lift for DMV IT. Planning the customer workflow around the physical separation was not ideal, but—baby steps. 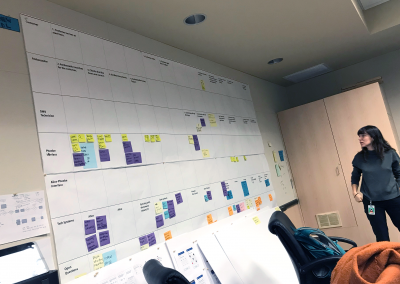 Relieving DMV office agents from process-imposed Bad Cop burdens
From our research we determined the highest value improvement opportunities to be—simply and unremarkably—addressing the myriad of uncertainties and unknowns for customers upon endeavoring a license or ID card task. Qualification gates, contextual help, thoughtful attention to expectations management, and providing clear visit preparation instructions for customers completing their applications in advance of their visit, was how to do that.

Regular iterative testing sessions helped the design team establish where customer knowledge-gaps were, and further helped us shape the messaging to get customers feeling more confident in their choices. 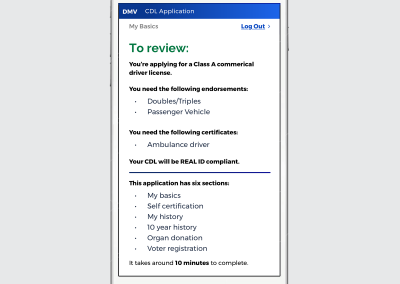 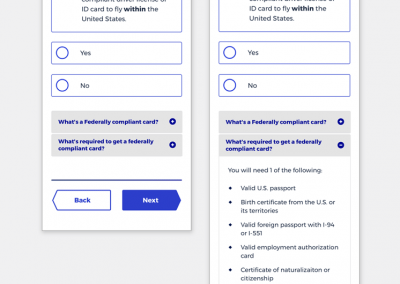 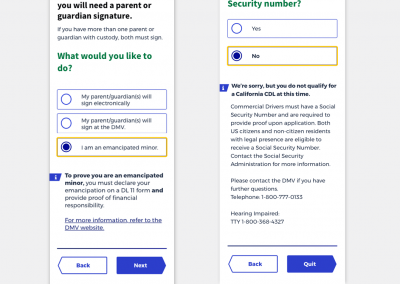 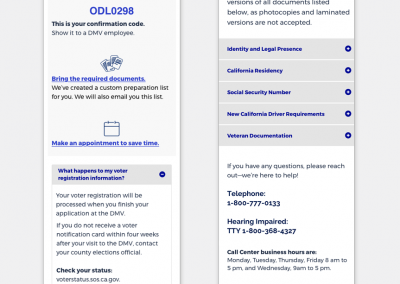 Plain Language: minutes to craft, weeks to push through the machine. User testing ride-alongs & knowing who to invite, essential to overcome. For the Voter Registration component of this project we worked in close partnership with the Center for Civic Design (CCD), whom California’s Secretary of State had previously retained for this project. Core to CCD’s practice is the evangelism of plain language. It’s a concept that may seem simple and obvious to designers, but is often a significant challenge on government projects. Inviting stakeholders for user-testing ride-alongs and workshopping through findings with them as active participants immediately after, helped the team conquer that mountain. Stakeholder mapping as a preliminary exercise to gain insight into power and personality dynamics among our many stakeholders helped us pick just the right folks to invite. 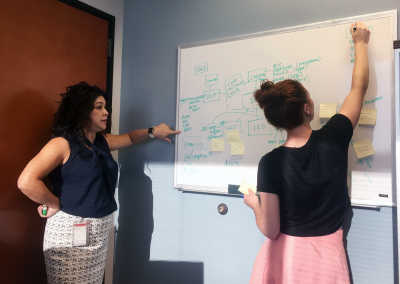 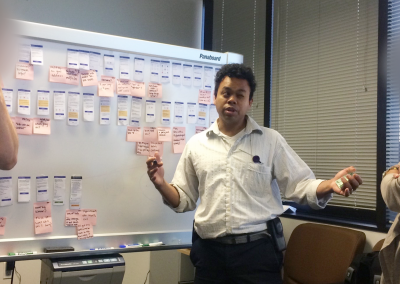 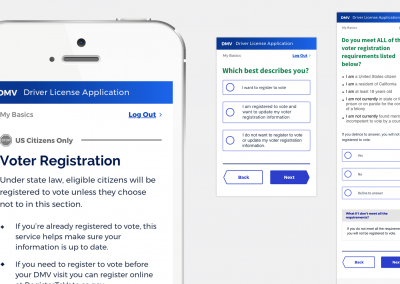 Not only did this exposure to user needs in the field foster reciprocal learning that everyone benefited from, but when our stakeholder’s bosses pushed-back on user-centered recommendations that felt too risky per anticipated judicial standards—we had new allies to go to bat for us. Allies who had witnessed real constituent needs in action, and had come to trust that the design team really was on the same side as the legal gatekeepers. AB1461’s “Opt Out” language & process requirements truly were a bear to shape into an experience that made sense—and this absolutely did take a village, to get right for both users and for the law.

Going paperless is a process—and we had to have a paper backup
For this final touchpoint we did 5 rounds of user testing. Paper has no “Command Z,” no opportunity for logic, has a much more physically-involved form factor, any signs of erasure nullified the form, and there was no room for real contextual help—so its unique usability and design challenges were a lively end-project spark for the design team. On an aside from 3 print design dorks determined to also make this form as beautiful as it was usable! 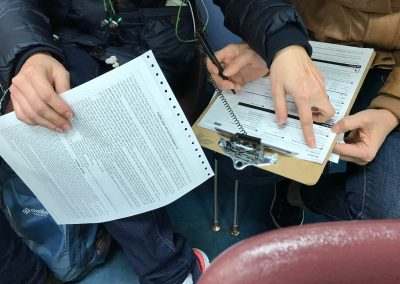 Testing participants with our form 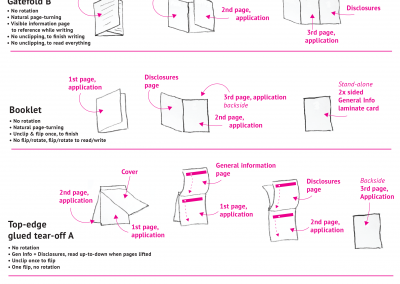 Making good use of residual space and addressing the pain-point of flipping/rotating in the cramped seating areas, were bindery priorities. 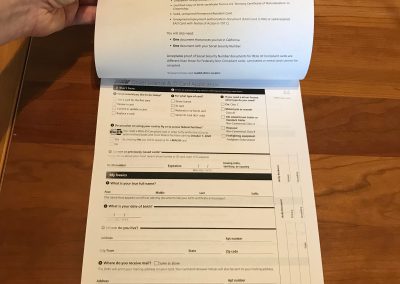 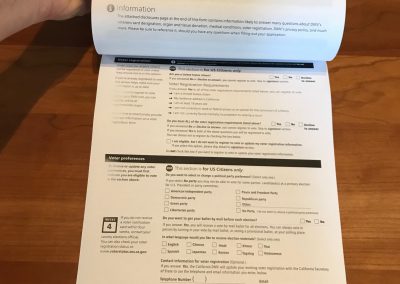 …the form has answers.

36 Million customers, 10 languages, multi-device friendly for even reluctant technology users, with A- 508 Compliance
Nine months is a tight window for researching, designing, building, iterating, testing, deploying, and scaling even the leanest of consumer service ecosystems—in just one language. We had ten. Ten customer-facing languages for two separate web experiences and one paper form; not to “support,” but to execute. Well.

The Center for Civic Design conducted testing sessions with non-English speakers using InVision prototypes the CDT design team built using vendor-provided (so, human) translations. Google Design’s published guidelines for typography across the character sets of multiple languages was helpful in guiding how we paired each translation to one of three CSS files crafted to enhance legibility. 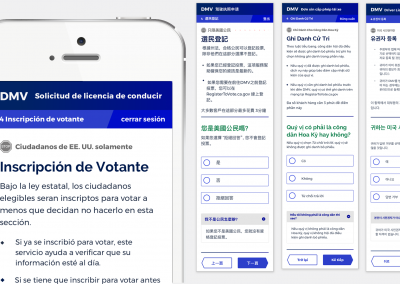 Spanish, Korean, Vietnamese, and Chinese prototypes were all tested with native speakers

(the Stop-sign was a non-negotiable stakeholder requirement) 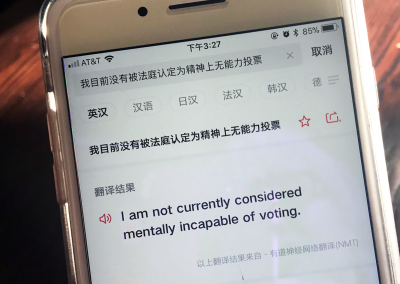 It was helpful to see Chinese characters on a user’s screen, at a size she considered legible.

Added bonus: seeing how a non-English fluent user does regular lookups of things she doesn’t understand. 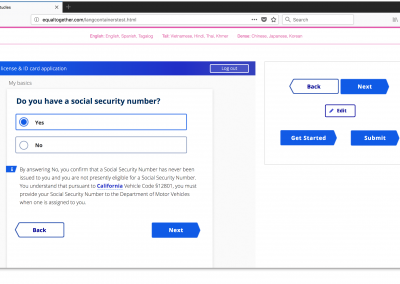 We created 3 sets of CSS for the different languages. View HTML Mockup 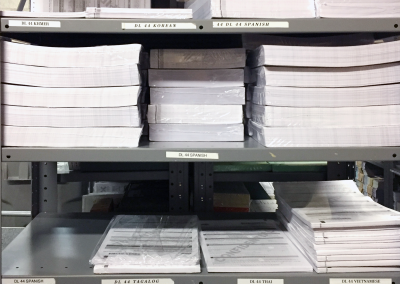 On April 23rd 2018 all 173 DMV offices began using the new application for all driver license and ID card customers, with all ~6,000 office agents trained and provided with the means to process those applications. The customer-facing application went live on the DMV website shortly thereafter.

While the core requirement of our project was to simply deploy a paperless process that reflected AB1461’s “Opt-Out” requirement for voter registration (because who needs democracy?), the opportunity to transform what had been a tedious and frustration-filled experience for both customers and office workers into something much smoother, was significant.

Shortly after launch at least one lawsuit was filed against the State of California.  An unfortunate artifact of both politicized inter-agency relationships and the black-hole of archaic backend systems not being well understood*, as well as pressure from State executives to complete the project by the deadline, “no matter what.” The integration between the DMV’s part of the system and the Secretary of State’s voter registration system was not done correctly, and over 100,000 voter registrations from the new experience were subsequently botched—with servers in Croatia also being called-up by the new system. (?!)

That lawsuit, and a problematic new cue’ing system for DMV being deployed weeks before, regrettably, took most of the attention away from the new experience delivered to folks. The resulting chaos, however, and a new governor in office and ready to shake things up, did usher-in a critical straw to break the California camel’s back in State leadership that had thus far hindered digital transformation efforts among the involved agencies.

In 2020 a proposed “Digital Experience Platform” was written into the California Vehicle Code (how innovation is done in government). California’s DMV has since adopted the turnkey “My DMV” platform that over half the states in the US have already been using. After checking-in with a project stakeholder (who remains a DMV employee) +3yrs later in late 2021, I was assured that they are still putting our strategic work and user research findings to use, even with the new turnkey system.

I recently re-connected with one of our DMV SMEs, who cheerfully assured me the Alice and Phoebe systems remain in place and going strong, even with the turnkey MyDMV system in place. The more exciting outcome imho, is that our work seeded real change happening at the institutional level. Internal employees own the new MyDMV experience and subsequent development work (as well as the Alice/Phoebe systems!), and those career civil servants now know about user experience as a practice domain, and how to get results with lean and Agile product development methods. Our two favorite SMEs got promotions, and are continuing the work we’d all begun together. It was a hellufa project, but that is about the happiest ending I can imagine. 🙂

* Stated publicly only because of how much time has elapsed, and lawsuits having been settled. Even though they were likely endeavored as opportunistic election distractions, to begin with.