Need: In 2014 conversations about the tech industry’s slide into a young/white/male monoculture were heating-up. No concrete evidence was available to support or deny any of the rhetoric, however. As a woman in tech, I needed little more convincing than my own experiences had provided—and as a person inclined toward action, I found myself growing restless from the climate an absence of clear evidence had cultivated.

Response: An investor friend offered to back my time spent on a modest research effort. Shortly thereafter I received proper funding to craft a solution opportunity that arose from my research, with fiscal sponsorship from Netroots Foundation. 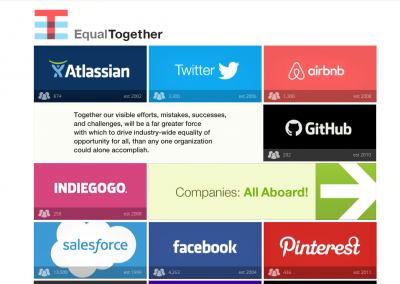 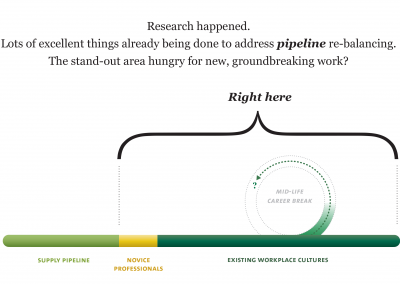 Calling bullsh*t on “the pipeline” excuse. 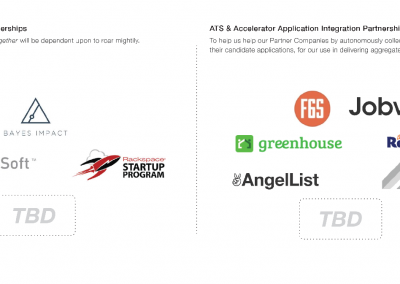 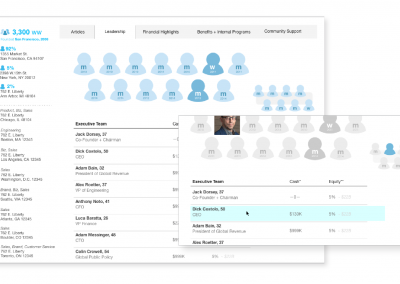 Telling the data stories that matter the most to disenfranchised people, not PR.

My initial plan was to spend 3 months doing nothing but immersive research to learn more about why existing “diversity” efforts had failed this industry known for its bold and rebellious cultural inclinations. Less than one month in however, the lack of clear, public data for conversations and solutions to focus on, became clear as a major pain-point any prospective solutions would need resolved before demonstrable change could happen. Public evidence sharing & community co-learning as change catalysts.
EqualTogether’s reporting platform was created to function as an opt-in analytics & benchmarking tool for capturing human capital metrics from resume solicitation to employee tenures, and publishing those numbers in a relevant, user-centric, and standardized fashion to tell the most compelling diversity narratives possible.

Opting-in to this platform required community participation for all “partner companies” to shoulder a mutual responsibility for co-creating actionable solutions; solutions bound to no copyrights, and licensed to share far and wide. Early feedback from customer prospects supported the interest in this. Non-partner companies who had shared EEO-1 reports publicly, would also be included—and identified as such. Not just telling the whole story, but consistent stories.
When the flood of companies releasing complied EEO-1 statistics in PR-guided diversity reports happened—especially Apple’s, claiming a far higher number of Black employees than anyone who’d spent time at 1 Infinite Loop could trust as legit—the need also became clear for consistent language, taxonomies, and governance, to guide those stories.

My YC advisers had been confident that “getting help” from someone within the community (me), would be an appealing pitch to companies. To achieve a proper seed round and launch an official MVP, I met with dozens of HR representatives executives—some from  the organizations shown in the prototype, more from lesser-known organizations. From almost all of them, legal departments shut down their involvement after the first or second meeting.

One well-known organization had not known they’d hit their headcount threshold for filing EEO reports (a common occurrence in tech) three years prior. Its legal department contacted me, directly. When PR and lawsuits matter more than doing the right thing—that is a far bigger problem than I ever set out to conquer. Naive as that may sound, it’s the truth. Had I the savings and the ability to self-sustain such an effort, I’d have welcomed it. Not only did I not, but hustling this work on the side of freelance design work to keep my bills paid, I also did not have the emotional fortitude to push through.

Prospective investors loved the idea of raising-up women in tech… yet were clearly uncomfortable by the focus on intersectionality and accountability; not just to me, but to other for-profit organizations. The community part of things delighted HR folks, stunted executives, and confused investors. Conversations with White male investors expressed an optimism in helping my people (I am white and cis-het), but not the rest. Black and Latine HR consultants I sought for counsel were un-surprised—but at the beginning had been intrigued enough by something they’d never seen before in EqualTogether, that I felt strongly I had to give it a shot.

If I were willing to package an offering that companies could feel good writing a check to, be held to no obligations by, would cause zero controversy, and would never be held accountable by. That just was never the point, though.

Controversy was never the point, either. The point all along, was that change is entirely possible, if it is desired. I’m proud that I took the risks, and I’m proud that I did the work. What leaders of organizations don’t want, however, I cannot force. Confronting your own privilege means vulnerability—and vulnerability is anathema to silicon valley’s culture of hustle. Yes, thanks in large part to the influence of the organization that funded this work in the first place.

Much as I did walk away from EqualTogether, I will never walk away from holding companies accountable for the impacts made by their control of capital, and cultures they shape that dominate the lives of millions, for at least 40/hrs a week. Labor matters. Culture matters. Representation matters. Much more matters, than marketshare or wealth. It is my hope that someday, more organizations and leaders will rise to that challenge.